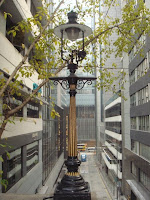 Before electric lights there were gas lamps – before them not much except candles and a lot of darkness. Cities were dark places before gas – when gas lamps came along suddenly the urban night was lit up – it must have been amazing to live through that transition – from a city of darkness to one of flickering gas lamps and the ability to see all the teeming life, crime and fun of the night-time city. . George Augustus Sala commented in 1859. “As I walk about the streets by night, endless and always suggestive intercommunings take place between me and the trusty, silent, ever watchful gas. Gas to teach me; gas to counsel me; gas to guide my footsteps, not over London flags, but through the crooked ways of unseen life and death”

I got all these ideas about the effect of gas light after listening to the excellent BBC Radio 4 show Thinking Allowed on gaslight with Laurie Taylor and subsequently reading Chris Otter’s book, The Victorian Eye: A Political History of Light and Vision in Britain, 1800-1910. Suddenly seeing things changes everything from police and government to criminals and ne-er-do-wells. 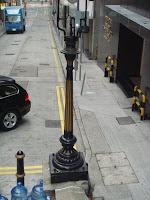 brings me, in an admittedly long and roundabout way to Hong Kong’s Duddell Street gas lamps which I often stroll past and rather like. Gas lighting came to Hong Kong shortly after being introduced in England in the 1860s and lighting up Hong Kong at night must have been similarly spectacular. The Duddell Street lamps at each of the stone steps (built between 1875 and 1889) were manufactured in 1922 Suggs & Co. Hong Kong had many other gas lamps, these being mounted on the balustrades were shorter than the regular street ones. Gas lamps like these were popular as they did not require nightly lighting and extinguishing in the way the previous kerosene lamps did. 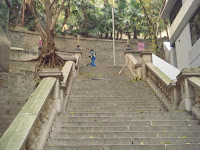 r 2 gas lamps were steadily replaced by electric lights throughout Hong Kong though these four at Duddell Street have remained and are still maintained by TownGas and come on every night to give a slight flavour of what gas lit Hong Kong must have been like.

What has always amazed me about these lamps and this staircase is how often there are couples there standing to be photographed for their wedding.

This is in a city where any building older than 10 years is considered past the use-by date.

For some reason Hong Kong people have nostalgia about this staircase, but not enough nostalgia to preserve other historic parts of the city (such as the harbor).

Amy couldDiablo III items depend on the actual date. Regrettably, Kathleen discovers which Interface is perhaps endure within the consumer house group using this kind of demonstrate that Interface can stay, Ough Buy Guild Wars 2 Goldgives an mental farewell to you in which the new mother, and even Ashley admits passion for Ough.


Do you believe that everyone is equal in this world. I do not believe it since unfair things happen around me every minute. Someone can get what he wants when he was born but others will never get what they deserve. What's your opinion? I usually play WoW to handle this negative feeling. But you know WoW gold is hard to farm and I only want to buy WoW gold at cheapest price. Whatever, although we can not change the world or the enviroment where we are, we can change ourself.