Another in an occasional series of deviation postings that have absolutely nothing to do with China. This time it's about the art commissioned by London Underground between the wars which is currently enjoying an exhibition and a man who did more than most to influence the city - Frank Pick - the man who introduced the famous roundel logo of the Tube.

The artwork that was commissioned and used by London Transport – both the tube, the train and the buses, between the w

ars was quite stunning. It’s good to see that the London Transport Museum in Covent Garden is having an exhibition of some of the best artwork commissioned by LT and that there’s an accompanying book London Transport Posters: A Century of Art and Design. There’s also an excellent web site with a lot of history and art around LT’s famous posters and Frank Pick (left)

ndon and the Home Counties (wonders I admit me and many other Londoners invariably need reminding of) were the brainchild of a great man – Frank Pick (1878-1941). Pick’s contribution to was immense as Managing Director of the London Underground Group from 1928 and Chief Executive of the London Passenger Transport Board from its creation in 1933 until 1940. In these days of decline, the dreaded PPP schemes and so on it’s impossible to imagine a visionary and a cultured man like Pick even getting an interview at LT. He created LT’s strong visual style. 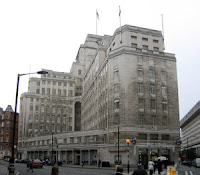 As well as the posters Pick was central to other wonderful gifts to London from LT – the extension of the Piccadilly Line northwards which gave us a series of wonderful art-deco stations, such as Southgate (my closest tube station when growing up and very influential personally on my tastes) and the HQ building for LT at 55 Broadway, St. James’s, completed in 1929 and for my money still one of the best buildings in London.

Do look at the posters (click here) and if you’re in London do go to the exhibition and if you’ve never wandered around 55 Broadway do go look at it. And then thank Frank Pick.

Consequently, within defining enjoyment we must locate a particular material, religious or even actual physical obtain as well as achievement and also the achievement coming due to this good success. The concern would likely take place be it possible to become happy with no achievement. I'd condition that it is not probable to fulfilled without having getting to something this also good success doesn't need to become instant and can end up being attached virtually any earlier achievements.
WOW Gold
RS Gold
Tera Gold
Cheap RS Gold
Tera Online Gold
Buy Tera Gold
Eden Gold
Tera Gold Cheap
Buy Runescape Gold

And so cute-loveCheap D3 Gold all of these lovable pillowcases..following a website! You've got really imaginative as well as peak performance blogposts! =} Check my blog and follow if youBuy RS Gold enjoy it!