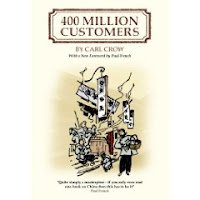 The other day someone asked me to dig out a couple of old case studies from Shanghai about the problems with designing products that appealed to the rather particular Chinese consumer and some rather disastrous attempts from the old days. Naturally I fell back to my old standard – Carl Crow’s 400 Million Customers (now reprinted and available here) and came up with the following two examples – fags and soap. Of course if you find Mr Crow interesting then someone not a million miles away from writing this blog did indeed do a highly praised biography of him, which you can also buy (click here). As you can see said biographer continues to milk the Carl Crow cow dry!!

Marketing disasters, products nobody wants and sales falling short of exaggerated expectations in China is nothing new. Products, brands and manufacturers struggling to find Chinese customers today are merely repeating the efforts of their fathers, grandfathers and even great grandfathers.

Carl Crow, a Missourian, arrived in Shanghai in 1911 as a journalist but soon swapped over to running an advertising agency deciding that’s where the money was to be made. His agency, Carl Crow Inc., dominated the advertising and marketing of foreign brands in Shanghai and throughout China for the next 20 years. In 1937 he wrote a best selling book – 400 Million Customers: The Experiences – Some Happy, Some Sad of an American in China, and What They Taught Him. It instantly became a classic.

Carl’s major point in his book was that few foreign brands took the time to understand the peculiarities of the Chinese consumer – they simply assumed he or she would like their product and instantly drop brands they knew well for these new arrivals – it didn’t quite work like that then; it doesn’t quite work like that now. Carl wrote in the foreword to 400 Million Customers:

“Not only do Chinese have very decided ideas as to what they like and dislike , but once they have become accustomed to a certain brand, no matter whether it be cigarettes, soap or toothpaste, they are the world’s most loyal consumers, and will support a brand with a degree of unanimity and faithfulness which should bring tears of joy to the eyes of the manufacturer.”

If only you can persuade them to change! Carl gave two initial examples of disasters – cigarettes and soap.

"I had not been conducting my advertising agency many months before a visiting manufacturer who was looking for trade opportunities in China said to me: “I suppose the Chinese will buy anything, provided the price is cheap enough.” That is an idea held by most people, even by some foreigners who live in China and should know better. In fact, I remember that I agreed with this manufacturer. It is easy to see how one might come to that conclusion. No one gets more enjoyment out of a bargain than the Chinese, or will search further or haggle more ardently to get one, but, on the other hand, no one will more stubbornly and successfully resist attempts to sell him something he does not want, no matter what the price may be. Mere cheapness is not enough to make him change his tastes or forget his prejudices. The widely prevailing demand for a distinct type of cigarette affords a good example of this and taught me my first lesson about the fixed tastes of the Chinese consumer who has for years smoked the British-style aromatic blends of Virginia and Turkish tobacco rather than American-style Virginia and Burley blended tobaccos.

One of our clients…felt so sure he was right about Chinese consumers that we undertook his blended cigarette advertising with a good deal more than the usual enthusiasm inspired by a new and potentially large advertising account. Nothing was overlooked in launching the venture. Salesmen got the brand stocked everywhere, and it was advertised by every approved method we or the manufacturers could think of. They were so certain of success that they were willing to let next year’s business pay for this year’s advertising, and they were generous in their anticipation of what future profits would be. Thanks to the assistance given by their New York advertising agency, one of the best in America, the campaign we put on in China was far better than anything that had ever been seen there before. But in spite of all that we could do, the cigarettes remained on the dealers’ shelves. Maybe the hypothesis that anyone who changed to a blended cigarette would smoke that kind ever after really would prove correct in China, if given a fair trial. But we were never able to prove it. So far as we could discover, w never succeeded in getting a single Chinese to become a smoker of our brand of blended cigarettes, and so couldn’t tell whether or not he would become a regular consumer once he got used to them.

Any number tried to smoke them, but, after a few puffs, they found the taste both strange and odious and would not buy a second packet. The Chinese sales fell back to the zero point from which they had started, and the advertising campaign was dropped by common consent of everyone who had anything to do with it. The only satisfaction we got out of the experience was that everyone praised the advertising."

"In a recent very comprehensive market survey we found that a world famous British household soap enjoys such popularity in parts of North China that nine out of ten shops which sell soap do not stock any other brand, though dozens of cheaper competing soaps are on sale in this territory and a few manufactured locally. Once in a while, when there has been a flood, or a drought, and the purchasing power of the local resident falls even lower than usual, he will buy a cheaper soap; but that is a temporary expedient, and with the return of a reasonable degree of prosperity he goes back to his old favorite brand, which was also the favorite of his grandfather. A big and apparently impregnable market like this is just the sort of thing other manufacturers like to train their heavy batteries on, and many of them have made used up a lot of ammunition and made a lot of noise, but without results.

No doubt many of them have made a soap practically as good and offered it at a cheaper price, but not one of them has ever built up a volume of sales big enough to let our clients know that there is any serious competition in the field. The consumer who occasionally tries the competing soap because of its cheaper price may fully appreciate its good qualities, but he is not sure the next cake will be so good. He has been fooled before by manufacturers who do not maintain the quality of their products, and is therefore suspicious. On the other hand, he has full confidence in the old brand. He has used it for years, his father and his grandfather used it, and it has always been the same.

The satisfactory domination of the North China market by this brand has a sound merchandising basis ands is due to the high quality of the soap in a very difficult field. Most of the water in North China is extremely hard, and cheap soaps, which will produce a satisfactory lather in the soft rainwater of the Yangtsze Valley, curdle in this water, which comes from springs and wells and is full of alkali."

(From Carl Crow’s 400 Million Customers: The Experiences – Some Happy, Some Sad of an American in China, and What They Taught Him, 1937)
Posted by Paul French at 12:58 AM

Why do we presume satisfied? Pleasure is normally relevant to some sort of obtain as well as good success. Whenever we attain as well as obtain anything, we presume fulfilled this also activates delight. The actual good success doesn't have being content material, it might very well be religious. It may be actual and actual physical, equally as the insomniac personal might happy following a very sound nights rest.
WOW Gold
RS Gold
Tera Gold
Cheap RS Gold
Tera Online Gold
Buy Tera Gold
Eden Gold
Tera Gold Cheap
Buy Runescape Gold

I am so happy this internet factor functions plus your report genuinely reduced the problem. Normally takes anyone up on in which residence guidance a person

For Runescape Gold for Saleguide who are a bit low on gold, you can check out our gold supply. Here, we offer the lowest prices in the industry for WOW Gold for Sale through the most secure virtual trading network on the www.zyy.com.

Exactly why do all of us believe content? Enjoyment Cheap Runescape Moneyis often highly relevant to some kind of receive and also good success. If we accomplish together with acquire nearly anything, most of us believe achieved this stimulates satisfaction. The particular good success doesn't always have being written content, it will rather be non secular. It could be true as well as actual physical, quite as this insomniac individual might delighted after Buy GW2 Goldhaving a very audio evenings rest.

My name is Leah Brown, I'm a happy woman today? I told myself that any loan lender that could change my life and that of my family after having been scammed separately by these online loan lenders, I will refer to anyone who is looking for loan for them. It gave me and my family happiness, although at first I had a hard time trusting him because of my experiences with past loan lenders, I needed a loan of $300,000.00 to start my life everywhere as single mother with 2 children, I met this honest and God fearing online loan lender Gain Credit Loan who helped me with a $300,000.00 loan, working with a loan company Good reputation. If you are in need of a loan and you are 100% sure of paying the loan please contact (gaincreditloan1@gmail.com) You can also whatsApp them at: at +44-75967-81743 (WhatsApp Only) .. and inform them Leah Brown addressed to you ..

I am glad that I saw this post. It is informative blog for us and we need this type of blog thanks for share this blog, Keep posting such instructional blogs and I am looking forward for your future posts. If the problem persists or you encounter any other issues with your HP 2540 Printer password, get in touch with the customer care professionals. Our professionals are available 24X7 and are efficient in solving all possible technical glitches.

Thank you so much for share this type of blog keeps the users interest in this blog, I really like to read this awesome blog. If you’re looking for a way to stream your locally owned content from your computer or NAS and if you’re a Roku owner, it’s simple to link your Plex account server to your Roku device and use Plex on Roku from the comfort of your home. You can watch, listen, and control everything connected with Plex through your Roku com link activate.