Carl and his 400 Million are Back

Shanghai based Earnshaw Books have finally got around to doing a reprint of Carl Crow's 400 Million Customers, originally published in 1937 and the best book on China ever written. The edition includes the original cartoons by the White Russian cartoonist Sapajou and a new foreword by yours truly.

Danwei have exerted a few pages to give you a taste too - click here to read it.

You can order the book online by clicking here.
Posted by Paul French at 2:05 AM 3 comments:

A few years ago to coincide with the publication of my biography of Carl Crow I issued a reprint of Carl's famous 1935 map of Shanghai. It proved pretty popular and so due to popular demand we've had some more printed. They're still RMB250 and if you're in Shanghai we'll send them round by courier. If you're anywhere else we'll simply convert RMB250 to your local currency and add the postage - you can then just pop us a cheque. Below are some details about the map. Anyone interested just email on paul@accessasia.co.uk.

This illustrated full colour map of the city’s International Settlement was commissioned by the Shanghai Municipal Council (SMC) in 1935 to be provided to visitors to the city as a tourist guide. Carl Crow was hired to oversee the project and used local artist VV Kovalsky to draw the map. Crow added the sidebar comments on the “history, customs and points of interest in this cosmopolitan city of Shanghai”.

Carl Crow (1883-1945) was originally from Missouri and moved to Shanghai in 1911 to help found the English language China Press newspaper. Over the next few years he covered the collapse of the Qing Dynasty, the development of Shanghai and the establishment of the Nationalist government. He worked briefly in Tokyo before returning to Shanghai to found the famous Carl Crow Inc, an advertising agency.

Crow was a prolific journalist and writer for publications such as Liberty, The Saturday Evening Post, Pearson’s, McClure’s and the Reader’s Digest. His best selling books included the Handbook for China (that ran through 13 editions between the wars), his series of anecdotes of business life in inter-war China, 400 Million Customers and a portrait of the foreign communities of the China coast, Foreign Devils in the Flowery Kingdom.

After being evacuated from Shanghai in 1937 following the Japanese invasion of the city, Crow returned to America. However, he was soon back in war-torn China travelling up the Burma Road from Rangoon to Chongqing. Crow died in 1945 in New York City. During his quarter of a century in China Crow interviewed and grew to know most of the major characters in the country’s history including Sun Yat-sen, Chiang Kai-shek, Madam Chiang and Zhou En-lai.

VV Kovalsky was a White Russian émigré artist and cartographer who freelanced for various newspapers, periodicals and advertising agencies in Shanghai between the wars.
Posted by Paul French at 9:13 PM 5 comments:

I've plugged the Earnshaw Books reprints of China classics before and will, unashamedly, again as they are excellent. The latest reprint is All About Shanghai and Environs - the 1934-35 Standard Guide Book - the classic guidebook from Shanghai’s roaring 1930s. Written with first-hand authority and an enthusiasm that is truly infectious, the authors captured and bottled the madness, excitement, depravity and fast bucks of the greatest boomtown the world had ever seen. Written as a guide for newcomers and visitors, this book today is a fascinating portrait of the old Shanghai in its heyday, enjoying every minute of the ride.

Peter Hibbard, a man who knows his old Shanghai, has contributed a foreword too which is useful. Earnshaw Books are available in Shanghai through Chaterhouse Books and other stores and in Beijing at the Beijing Bookworm and seem to be in all the bookshops in Hong Kong. There's a good website though where you can order direct - http://www.talesofoldchina.com/store/
Posted by Paul French at 8:02 PM 1 comment:

A friend sent me some photos of the medals awarded to his grandfather by the Chinese government between the wars. 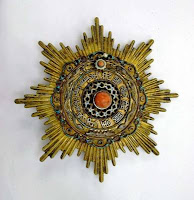 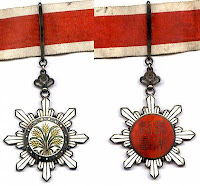 Last is the Order of the Golden Grain

A quick dash through Harbin and not much time to do something I keep meaning to and stay at the Hotel Moderne. The hotel – famous between the wars and a major center of Jewish and foreign culture at the time (and Japanese spies) has predictably been mucked about a bit but is still sort of intact. In the old days the service was apparently impeccable - Chinese, Korean and White Russian employees mingled among the crowds attending musical performances.

According to the plaque outside put up by the Harbin Municipal Government’s Urban Planning Bureau – the hotel was built by a Russian-Jewish merchant in 1906 and completed in 1913; designed by CA Vensaen and qualifies as Art Nouveau. You get the idea from the ad.

I’m prompted to think about the Hotel Moderne not just after dashing through Harbin for a few hours but as I also recently came across this old luggage label from the place.
If you’re passing through the hotel is at 89 Central Street, Daoli District
Posted by Paul French at 9:22 PM 3 comments:

Man and Wife of the Year 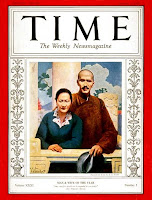 Time magazine’s tradition of selecting a Man of the Year began in 1927, when their editors sat around trying to think up stories during a slow news week.

A few notable people with China links have been given the award (occasionally women were also featured) - Wallis Simpson in 1936 as the first woman, though not of course for her Shanghai courtesan days but rather for nabbing a King (reputedly using some tricks she did learn in her Shanghai coutesan days). With the onset of the War in China Soong May-ling (Madame Chiang Kai-shek) in 1937 with the Generallisimo – Time owner Henry Luce (or course himself born in China) was infatuated with her. Richard Nixon and Henry Kissinger got the honour (if being nominated for anything by a boring right wing magazine is indeed an honour?) in 1972 for opening relations with China and Deng Xiaoping in 1985 (the oldest person ever to be given the award) for being really old and launching the reform process.

No idea who’ll get it in 2008 (and don’t care much either - they gave it to Putin last year so their hit rate is hardly much good) but as the Chiangs appeared on the cover in January 1938 we can, I suppose, call this an annversary. And anyway Time’s 1938 Man of the Year was Adolf Hitler and I’m not putting a picture of him on my blog!
Posted by Paul French at 7:07 AM 6 comments: