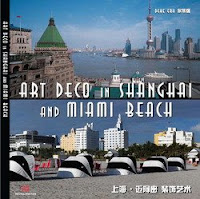 Shanghai and Miami Beach are two of the great architectural repositories of art-deco architecture in the world though of course the pot is slowly emptying in Shanghai as roads trump buildings while, as far as I can tell, Miami Beach seems to have done a far better job at preservation.

The comparison is stark in the new Old China Hand Press volume Art Deco in and which follows their 2007 Shanghai Art Deco. The new book features 50 photographs of each city by photographer Deke Erh (Er Dongqiang). There’s also text on both from Tess Johnston in Shanghai and Clotilde Luce in Miami Beach - a mini-tutorial on Art Deco's many and varied features, most far better preserved in Miami Beach. argues that can well serve as an example to the city of on how the preservation of the old can enrich a 21st century city, both aesthetically and financially.

has also now got a very good warts and all history with Stephen Gaines’s Fool's Paradise: Players, 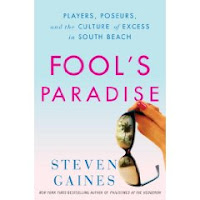 Poseurs, and the Culture of Excess in which is well worth a read for details on both how the city was preserved and also the sleazy fun side of the place.

That’s magazine reviews Art Deco in and and quoted Deke Erh as saing “fortunately the Shanghainese have come to attach importance to the conservation of their historical buildings.” The magazine then notes some guff about the run up to EXPO which I assume is required by the censors these days. This of course is nonsense given that I recently had to post about supposedly preserved buildings in the old Jewish ghetto being torn down to allow a road to be widened. EXPO will lead to more being destroyed not less. Truth is there’s no real sign of any heightened consciousness of architectural heritage yet and may never be until everything is gone.

Great post Paul.
I have Art Deco Shanghai so I'll be sure to check out this new book.

I like your blog,expecially this post,if you want to contract me please go to the http://www.zyy.com/,if you also like play game,WOW Gold also can contract me.

Among the many Diablo III itemsthings in which terrible corporations have already been able to accomplish is always to get credit rating for the work or maybe feelings. You never enjoy it each time a professional does it, but with in which category, you experience it's likely you have several options to stop what they're performing.Buy Guild Wars 2 Gold What now whenever a administrator does it?
Seriously Rare metal